Joseph Munggenast – A Tyrolean in the realms of Lower Austria. Through the ages an effigy of the contemporary is formed, petrified to classical form and spirit 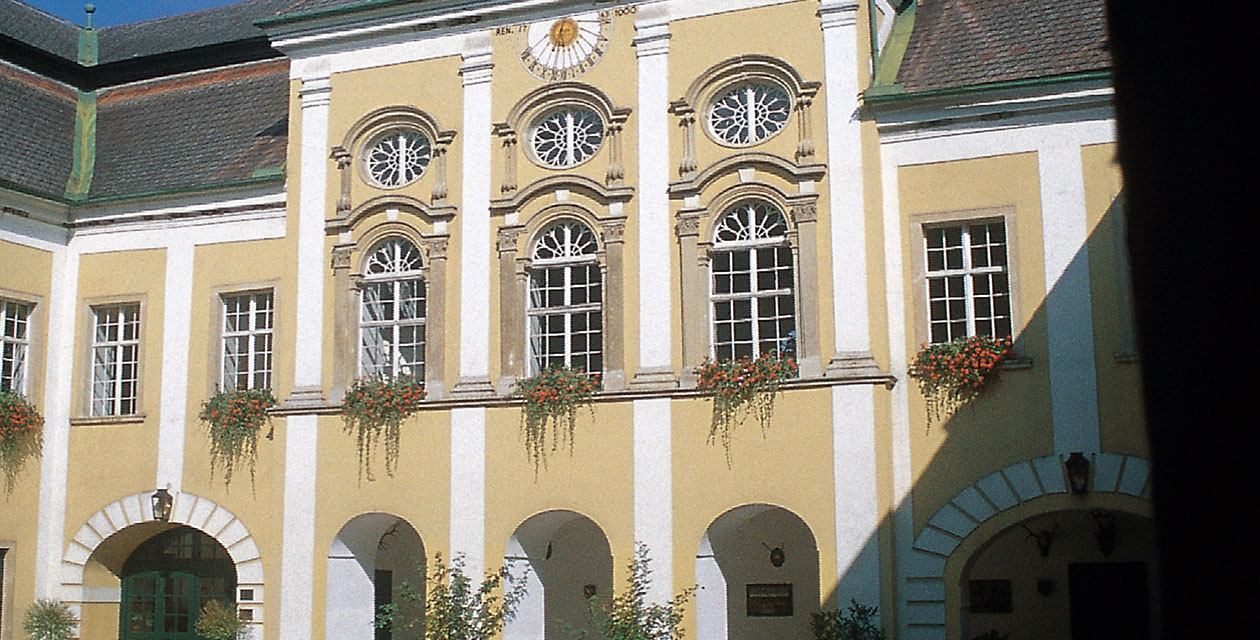 The castle is situated next to the church on the Burgberg, and together they form the base of the fortification. The building is a four-winged complex with a Renaissance core. Gobelsburg Castle evolved from its once fortress structure as documented in 1178 into a castle by the 16th century and  in 1725 it was completely rebuilt by Achaz von Ehrenreich.

The castle presents itself today as a two-storey, four-sided building complex with a massive mansard hipped roof and a high compensatory base rising to the north. The main façade of the south tract is a 13-axial with 5-axial protruding façade bays, as well as interlacing plaster work beneath the window roofing and in the fields following. The middle-axis has a gabled portal with pilasters on the sides and depicts the Zwettl Monastery coat of arms. A double coat of arms can also be found in the gable field. The windows of the ground floor are furnished with baroque gratings.

In the lenticular courtyard there are arcades with groin vaulting on the north and south sides which are remains of the building from the 16th century. As a main accent to the courtyard in the north wing, a tri-axial central pavillion rises a half-storey higher, emphasized on the exterior and courtyard side in the upper storey by round-arch windows and oblique oval oculi between gigantic pilasters, respectively , standing volutes. In the raised part one can admire the sundial of 1743 (renovated in 1966). The entrance door is equipped with metal fittings and handles from around the middle of the 18th century. In the drive-through entrance hall, on the north side, a wrought-iron door with metal bands and hand grips still remains from the 16th century.

One can reach the top floor up a triple stairway with a wrought-iron grill from the mid-18th century. These grandiose rooms, of which there are six in number, are housed in the south tract. In the south-west corner is the chapel with a stuccoed flat ceiling. There is an oval frame on the curved mirror containing the oil painting “The Birth of Christ” from Martin Johann Schmidt, from the middle of the 18th century. It is decorated with a sarcophagus altar,  a picture-frame altarpiece from 1769 and a side pilasters with volute extensions. The altar picture depicts “St. Bernard Before the Cross,”  also from MJ Schmidt.

The rooms on the top floor are adorned with leaf work and interlacing stucco. The south tract is characterized by grooved flat ceilings with stuccoed or painted scenes from Roman or Greek mythology. A further characteristic of these rooms are the four tiled ovens from the second half of the 18th century. These are glazed in various colors, with partly unglazed, respectively, gilded interlacing decoration with figural additions.

This website uses cookies to improve your experience while you navigate through the website. Out of these, the cookies that are categorized as necessary are stored on your browser as they are essential for the working of basic functionalities of the website. We also use third-party cookies that help us analyze and understand how you use this website. These cookies will be stored in your browser only with your consent. You also have the option to opt-out of these cookies. But opting out of some of these cookies may affect your browsing experience.
Necessary Always Enabled
Necessary cookies are absolutely essential for the website to function properly. This category only includes cookies that ensures basic functionalities and security features of the website. These cookies do not store any personal information.
Non-necessary
Any cookies that may not be particularly necessary for the website to function and is used specifically to collect user personal data via analytics, ads, other embedded contents are termed as non-necessary cookies. It is mandatory to procure user consent prior to running these cookies on your website.
SAVE & ACCEPT
Go to Top